Rilakkuma is a Japanese character and was created by Aki Kondo produces by San-X in 2003. The meaning of Rilakkuma is a combination of the japanese pronunciation for Relax (rila) and Bear (kuma). Rilakkuma and Tarepanda (another character produced by San-X) have been described as "huge hits in Japan" by The New York Times. By May 2010, Rilakkuma has ranked the fifth most popular character in Japan in a survey of the Character Databank. 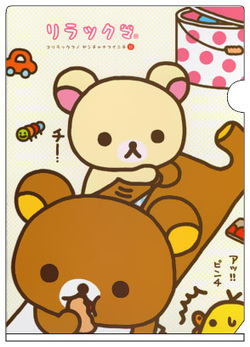 Rilakkuma is a soft toy bear. On his back is a zipper which when opened reveals a light blue polka dot patterned material. The reason for the zipper on his back is unknown.

Rilakkuma mysteriously appears in the female office worker Kaoru's apartment one day. He is a soft toy bear who has apparently decided to take up residence there. He was first seen in a series of picture books called Rilakkuma Seikatsu produced by San-X but since has become equally popular as a soft-toy character. In the picture books, he is often seen dressed up in a variety of costumes such as a kappa costume. In addition, it is implied that even in his usual appearance, his entire lower body is a costume, which he will often replace when it gets old or dirty (Rilakkuma is frequently seen sitting around waiting for suits that look exactly like him to dry on the clothes line). However, it is not clear whether his head is also part of his costume. His favorite foods are dango. pancakes, omurice, and custard pudding. True to his name, he enjoys relaxing and his favorite things include sleeping, lying around, watching television, listening to music and soaking in hot springs.

Rilakkuma is often accompanied by Korilakkuma, Kiiroitori named her Korilakkuma because she looks like a small Rilakkuma (Ko means small or little in Japanese). She also mysteriously appeared at Kaoru’s house. Rilakkuma didn’t know her at the time. She is full of vigor and is very mischievous.
Kiiroitori, a yellow chick who lives at Kaoru’s house. Kiiroitori means “yellow bird” in Japanese. He used to be in a birdcage but now he comes out at his own discretion and scolds Rilakkuma and Korilakkuma because Rilakkuma is too lazy and Korilakkuma is too mischievous. Sometimes he feels down because he thinks he scolds them too much. He plays a tsukkomi role (considered to be the smarter, more logical one who criticizes others for making mistakes). Kiiroitori is basically the opposite of Rilakkuma because of the bird's hard-working nature and love of cleaning. Kiiroitori is Kaoru's pet chick. Korilakkuma frequently plays pranks on Rilakkuma while he is sleeping, such as drawing on him, putting headphones on him and sewing odd color patches on his bear suits. Most of the time, Korilakkuma doesn't say a word, but sometimes she imitates what Rilakkuma is saying.
Korilakkuma also has the appearance of a bear, but also has a red button attached to her chest, and so it seems that she is also not a real bear. However, unlike Rilakkuma, she doesn't have a zipper on her back. Her favorite foods are strawberries, apples, and cherries. She loves playing with her radio controlled duck. Like Rilakkuma, she also likes listening to music, particularly at loud volume using her music player.
Click here for more Info on Rilakkuma